As seasons change, so do our activities. We take up new sports or exercise routines; we take to the outdoors to start gardening again or to tackle a home improvement project. Strains from unaccustomed tasks such as these are likely to cause sore muscles.

Fortunately, there’s Arnica, a convenient and reliable plant for muscle pain, stiffness, and bruises. The Arnica plant has been used for centuries as a natural pain reliever.

Arnica montana, what is it?

Arnica montana, also known as Mountain tobacco, mountain daisy, or fall herb, is a plant known for its medicinal properties. Arnica montana is a plant which grows wild in mountain regions and is heavyly protected. Its collection is regulated. The flowering season is from June to July depending on the altitude.

Arnica can be used as an ointment, gel, or cream on unbroken skin or taken internally in form of pallet.

St. Hildegard, a German nun known for her keen observation of nature and physiology, among other things, wrote about the healing properties of the Arnica montana plant in the 12th century. Since at least the 16th century, mountain people in that area have used it to relieve muscle aches and bruises.

Today, Arnica has grown to be one of the most popular homeopathic products throughout the world. It is trusted by professional athletes to soothe sore muscles, by prominent cosmetic surgeons to relieve post-procedure pain, and by savvy parents to treat playground bumps and bruises. Arnica can also be used to relieve stiffness from flying or long-distance driving. And anyone who bruises easily will appreciate Arnica’s ability to reduce bruise discoloration.

To help recover from minor injuries, overexertion, or surgery, Arnica is a must for everyone. Whether you are an active baby boomer, a weekend warrior, or a professional athlete, it’s the perfect answer to all of life’s little injuries.

The compounds of Arnica montana

Arnica montana contains many compounds including: 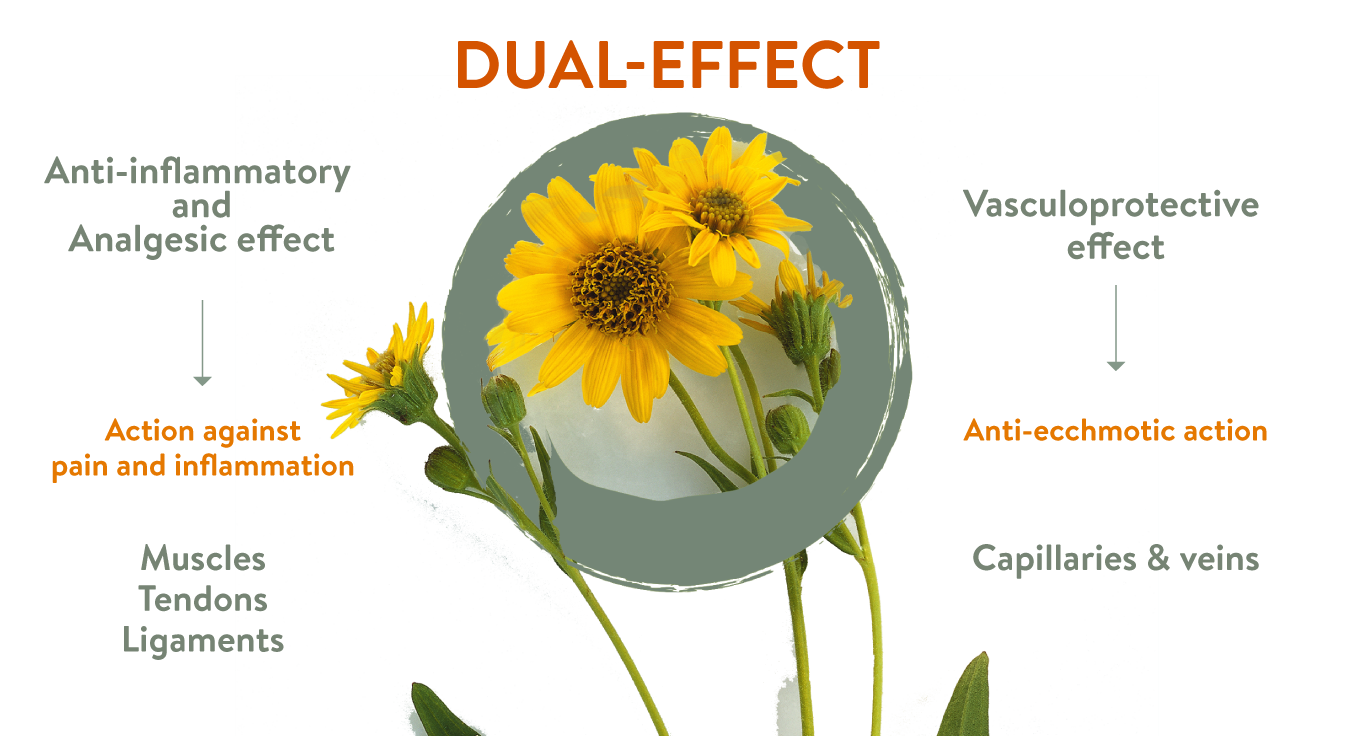 Helenalin, the plant’s main active component, interferes with the regulation of genmes coding for many inflammatory mediators at a very low cytosol concentration. Swelling and pain from inflammation are therefore reduced. Among other components, polysaccharides stimulate phagocytosis and reduce bruising.

The composition of Arnica depends strongly on its underground and aerial environment (animals, insects, sun, soil pH, etc.) and the molecules they secrete are mainly used for its protection (animals, bacteria and fungi, solar radiation). To guarantee maximum quality, Laboratoires BOIRON® have defined good practices for harvesting Arnica monata. Such as Botanical species must be harvested (or cultivated) outside industrial, urban, intensive andtraditional cul tivation zones, or roads, to avoid pollution as far as possible.  The health of the plants must also be perfect (no scale insects, disease, rust, etc.). The plants must be delivered immediately after harvesting (within 48h), in aerated packaging and refrigerated trucks. BOIRON® good harvesting practices also aims to ensure the sustainability of the species. For exmaple not to gather more than 30% of a site’s potential; only take a small part of the rhizome. By leaving most of the underground stalk in place, the species is sure of renewal the following year.