On the 90th anniversary, we asked employees to tell us their stories related to the company: family, mobility, and expatriation, many of them shared a little piece of their life with us. Discover the testimonies of Françoise, Carole, Maria José, Luigi, Vincent, and Ghislaine! 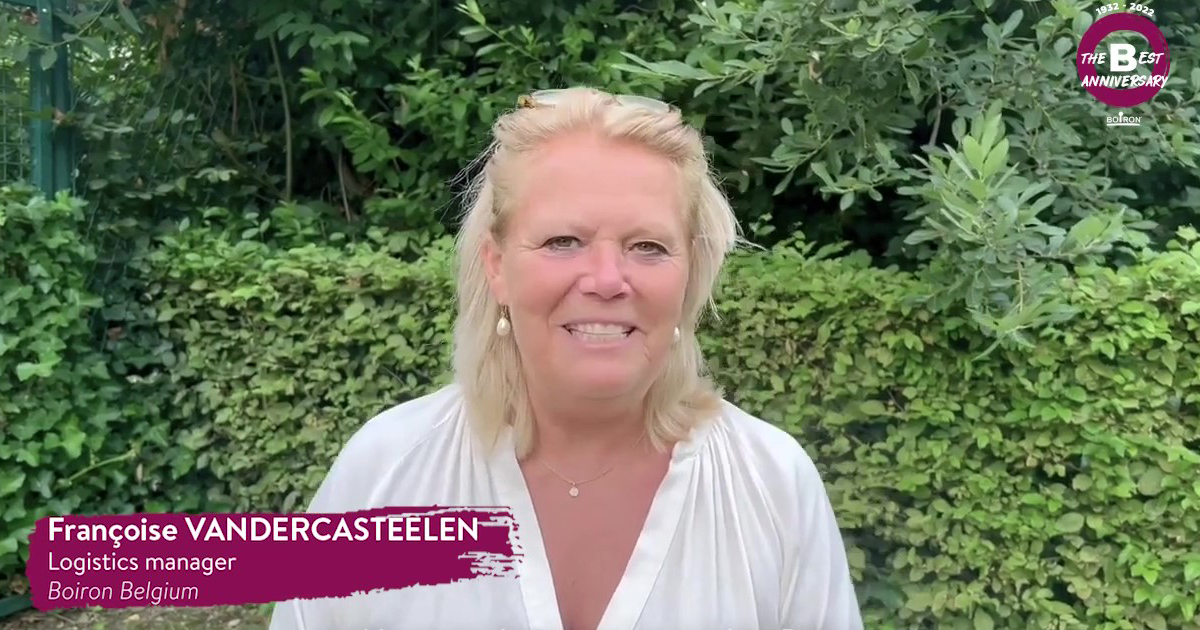 Logistics Manager of the Belgian subsidiary, at Boiron for 34 years!

For 34 years I have been part of the great Boiron family. 34 years in the same company is not easy but there are two reasons for me to walk with Boiron. The first reason is Boiron. Boiron has always given me the opportunity to evolve within the company. I started at the preparatory stage and now I’m in logistics. The second reason is colleagues. Being part of the small Belgian group Boiron is great, while there is a good atmosphere and colleagues are always helping each other. During leisure time, there are always colleagues who organize special lunches, a little walk, or jog, and we even had painting sessions. I travel from one department to another, I discover, and I am always accompanied by great colleagues.

Joyeux Anniversaire, happy birthday to Boiron for the 90th anniversary. We are on the way to 100 years! 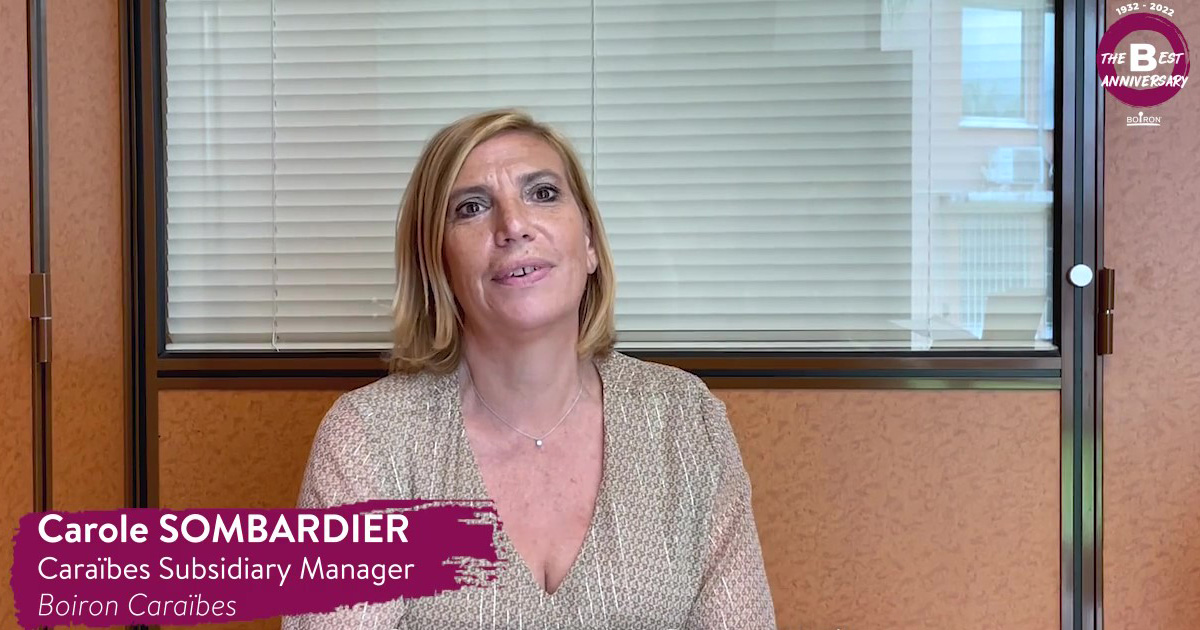 From a summer job at the Sainte-Foy preparatory to Director of the Caribbean subsidiary, work with Boiron for 31 years.

Since my mother was a preparer in the laboratories in Sainte-Foy-lès-Lyon, I suddenly, as the child of an employee, worked in a summer job on the Oscillococcinum channels. Then I came for an internship in the Financial Department. In 1989, I left to do my studies. In 1991 I came back. I knocked on the door of the Financial Department, and I was recruited. I worked for 15 years in Sainte-Foy-lès-Lyon, then in Messimy in the Administrative and Financial Department. And then in 2005, on the merger with Dolisos, I left for Switzerland where I held various positions and in particular Director of the subsidiary. Later, the company gave me the opportunity. In 2021, I joined the Boiron Caribbean subsidiary, where I have held the position of subsidiary director for more than a year now.

So, I am lucky to be able to do 3 countries in 30 years of a career within Boiron. 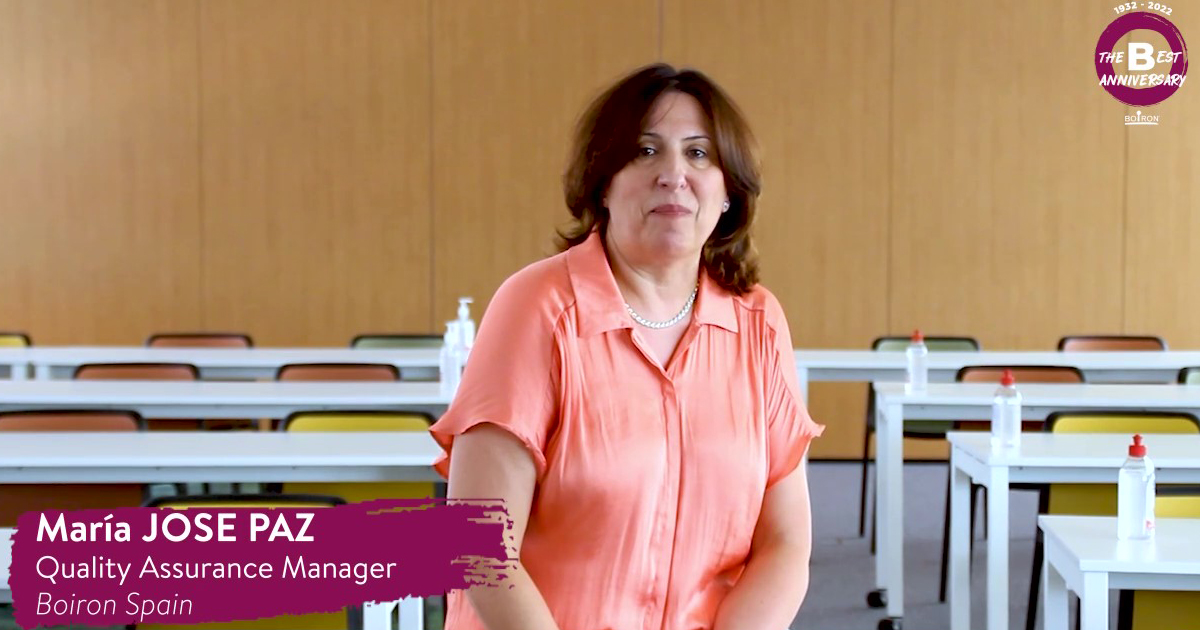 Having just finished my pharmacy studies, Boiron offered me my first job opportunity. It had been 6 years since Boiron arrived in Spain. In the Spanish subsidiary, we had about twenty people. During those years, the Oscillococcinum 6 units began to be marketed in Spain, which was a milestone for Boiron. Today, 30 years later, Boiron is consolidated in Spain and made up of a great team. I would like to say that I grew personally and professionally at the same time with Boiron in Spain. I am proud to tell you that this year, we obtained the first registration of Boiron’s therapeutics medicine in Spain.

I will be there to celebrate the century of Boiron with all of you. 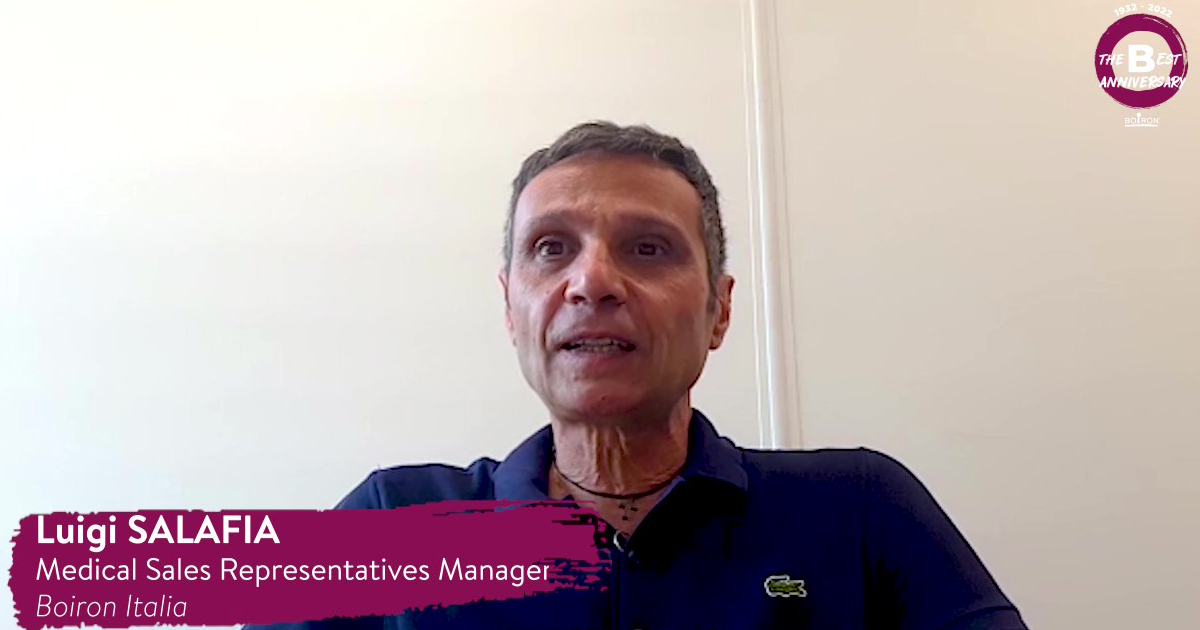 The Medical Sales Representatives Manager of the Italy subsidiary held various positions with a passion for 26 years.

I have been lucky enough to hold different positions in the company. I was the Plant Manager, Scientific Specialist and currently, I am Area Manager. So, for me, Boiron is surely a company where there is growth, vitality, opportunity, and dynamism! Many things have changed over the years, we have grown a great deal, but what hasn’t changed is professionalism, the desire to do things, the enthusiasm, and above all, the people’s worth. We had the fortune of working with great professionals, and charismatic people on the launch of new products, CEDH, for doctors and pharmacists.

All these experiences as well as all of the people I met are strong motivation, strong energy in the work every day with the doctors, the pharmacists, and with my scientific informants! Happy anniversary to all of us! 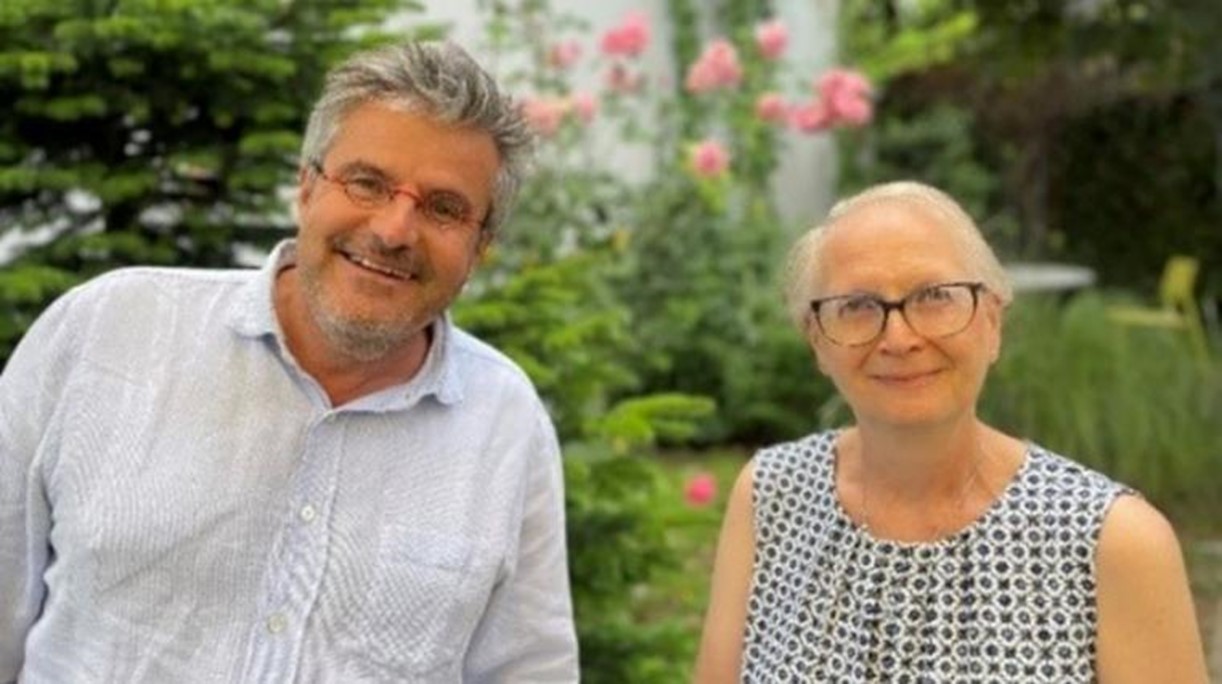 Director of the North establishments worked with Boiron for 36 years with wonderful workplace keywords: motherhood, childbirth.

In September 1986, after my military service and graduated from the pharmacy faculty of Chatenay Malabry, I found a job for a fixed term of 7 months to replace a young incumbent, who had just bought her pharmacy in the Paris suburbs. What she hadn't planned was that she got pregnant a few days after her installation... As after two months of pregnancy, she had to stay in bed, she hired me...

So, I started this replacement at the beginning of October. And in mid-November, the pharmacist calls me to say: "Vincent, I'm sorry, but the pregnancy ended (she then had three beautiful children!) and I'm going back to work, I know it's not going to happen. do not break a CDD, but I really must go back to work, and I will not be able to keep you for too long. I answered her: "don't worry, I will find another job", she then said to me: "you are very nice too, to help you in your efforts, I am offering you an ad in the monitor pharmacies" (journal of the profession which notably publishes job advertisements)

With the 200 francs she had given me, quite a sum at the time, I had paid myself a substantial insert for my ad where I highlighted all the acheivement I had made during my studies. A few days after the publication, the director of the French laboratory agency LHF calls me at the pharmacy to offer me a fixed-term contract "in replacement, for part of the tasks and during maternity leave from a person who, today, is my management assistant for the France Nord establishments: Ghislaine Alizard!

I started on December 1, 1986, and after the birth of Ghislaine's daughter and when she returned from maternity leave, my boss suggested that I continue...Thus, the adventure, planned for a few months, has been going on for 36 years!

The management assistant to the director of the North establishments, she is the “superwoman of information processing” on workflow scheduling no matter where she is for 40 years.

I entered a one-month summer job in the water library service of the LHF establishment in Asnières in July 1982, and from the month of September I was on a fixed-term contract to pick up the work from staff on maternity leave in the "address cards" service. At that time, all orders placed by telephone from the pharmacies were typed in 5 copies using a carbon. It was then necessary to identify this bundle of "order form" by placing an imprint of an address card (credit card type). This card contains all the information of the pharmacy allowing invoicing as well as their method of delivery. The cards were classified by the department and postal codes, and I used an "iron" to "duplicate" the information on all the pages of the order form. As we served 1/4 of all the pharmacies in north-west of France…. There were thousands of cards because pharmacies could have different delivery methods on a day!

Then in January 1983, I was confirmed on a permanent contract following retirement and assigned to the "scheduling" department. Ihad to highlight on the typed order forms about the drugs that are not presenting in “barge” stock, which is to be manufactured at the Preparatory (PMC and unitary). Furthermore, it was required to produce the labels which was also typed by the machine! I had to have all the stock in mind because if I asked for the labeling when it was useless... what a waste of time! I also had to identify toxic and dangerous drugs to register them in a register with a prescription number. I also took the opportunity to correct spelling or typing errors to facilitate the work of the typists in the label department!

After the Boiron-LHF merger and over the years, I changed both profession and place of work: Asnières, then Paris, Levallois, and finally Pantin where since 2017 I am both the assistant secretary of the management of the establishment of Pantin and the Region for Vincent that I have known for 36 years! And all that... always with the same attachment to the company and the teams I work with.